Marvel Comics has always found itself inherent to the kids of all generations. The craze and fame that it carried beyond years eventually has been found in a greater realm through celluloid,where the superheroes in comics became the gigantic matinee idols across the planet.  The ‘AVENGERS’ has offered us the most enthralling experience of bringing superheroes together. In fact, the franchise has amplified its domain to the pinnacle of infinity with every installment. Following Avengers (2012) and its second part – Avengers: Age of Ultron (2015), the third part ‘AVENGERS: INFINITY WAR’ brings a much Brobdingnagian scenario of 22 Superheroes. Guess what’s more spectacular than this? They are all gonna lock horns with just a single villain – THANOS.

Every character in the film is a spin-off from Marvel Comics and they have a huge fan following base across the globe.

More than all, what’s going to be a bigger attraction is that Rana Daggubati has dubbed in Telugu for the character of Thanos. The most dashing baddie from the ‘Baahubali’ franchise rendering voice for the planet’s most dreaded villain is definitely going to add more intensity to the  film.Russo Brothers – Anthony Russo and Joe Russo have directed this film, which has musical score by Alan Silverstri and cinematography handled by Trent Opaloch.

Avengers Infinity War (Tamil,Telugu,Hindi,English) is scheduled for release in India on April 27, 2018. 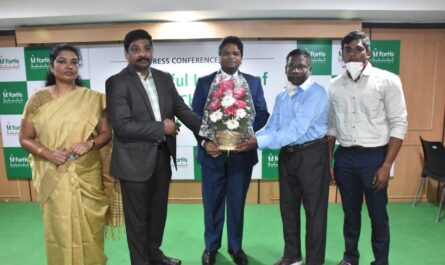 In a First in Chennai, Non-Invasive Leadless Pacemaker implanted in a 60-year-old at Fortis Hospital Malar

My First Pimple”: a pan-India campaign to empower girls