Police Officer Billie Jean Finnick (Jesi Jensen) has returned from military duty overseas to her hometown of Lake Orion located just outside of Detroit, Michigan. Officer Finnick’s return is anything but a warm homecoming when a series of murders and unexplainable events begin to plague what is ordinarily a quiet town. With the town in disarray, Officer Finnick begins an investigation that leads her down a path yielding more questions than answers and a budding romance with her deceased best friends brother Ellis (Bobby Laenen). As the investigation unfolds, evidence of the supernatural mount up with all signs pointing to the return of the Nain Rouge! A theory that is quickly dismissed by the towns Police Chief (Jerry Narsh) and de facto community leader Pastor Wilhem (John C Forman). It is said that The Nain Rouge, known as Detroit’s harbinger of doom, first attacked Detroit’s founder Antoine Cadillac in the 1700’s when French explorers disrupted the demon upon settling the city. Now over 300 years later Nain Rouge has been awoken and is back to seek retribution. Officer Finnick must work against the clock as she attempts to stop the Nain Rouge before Lake Orion is left completely in ruin!

LOCATIONS
In recent years Michigan has become one of the leading locations to film major motion pictures due to its industrial core of Detroit, beautiful country side, sprawling shorelines of the Great Lakes and 4 distinct seasons.
Many of the locations featured in Devil’s Night: Dawn of the Nain Rouge have been seen in many of Hollywood’s biggest films, some include:
• Batman v Superman (Warner Brothers)
• 8 Mile (Paramount Pictures)
• Transformers 1 – 5 (Paramount Pictures)
• The Island (DreamWorks)
• Red Dawn (MGM)
• Gran Torino (Warner Bros. / Malpaso)
Napoleon Duraisamy (Dr. Raji)
is best known simply as Napoleon. Proudly addressed by his fans as Maaveeran. Napoleon, an Indian film Industry’s famous actor has acted in over 100 films. Devil’s Night: Dawn of the Nain Rouge marks his debut in an American production.His career in films began at age 27 when he watched the film Udhayam, the dubbed version of the Telugu film Siva, and was inspired to take up acting. He entered the Tamil film industry in 1990 with one of the India’s famous Director who also proudly called as Iyakunar ImayamMr. Bharathiraja’s rural film Pudhu Nellu Pudhu Naathu, playing the antagonist role. Other roles followed, including in various Indian languages are, in Tamil: Ejamaan, Virumaandi, Dasavathaaram, Seevalaperi Pandi, Ettupatti Rasa, Vattaram, Musthaffaa, Thenkasi Pattanam, Ayya and Pokkiri.In Telugu: Kunthiputhrudu, Hello brother, Saleem and Oye. In Malayalam: Devasuram, Ravanaprabhu, Megasandesam and Kanal Kireedam.
In Kanada: The Government, Rowdy Brothers, Billa Ranga, Jayasurya. His role as Mundakkal Shekharan in the blockbuster action film Devasuram is widely regarded as his best performance to-date. He reprised the role in the Ravanaprabhu, a sequel to Devasuram.Among the forthcoming Tamil, Telugu and Malayalam films in which he is featured are, in Tamil: Seema Raja, Yaagam, Vallavanuku Vallavan. In Telugu: Sarabha and In Malayalam: Ay.Na.Aside from his career as an actor, Napoleon is a notable politician and the founder and chairman of the Jeevan Technologies. He was the Minister of State for Social Justice and Empowerment in Indian Prime Minister Manmohan Singh’s Cabinet.Tel K. Ganesan (Executive Producer) 248.910.4965 Tel@kyybafilms.comDAWN OF THE NAIN ROUGE
AT A GLANCE
Title: Devil’s Night: Dawn of the Nain Rouge Tagline: Fear the Legend
Genre: Crime / Supernatural Thriller Director: Sam Logan Khaleghi
Est Running Time: 90 Minutes Executive Producer: Tel Ganesan
MPAA Rating: R (Strong language / Violence) Production Companies: Kyyba Films, SLK Media 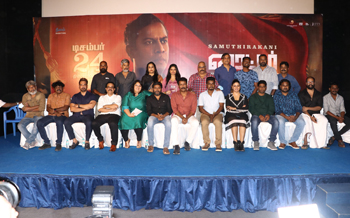