Chennai:Apollo Hospitals, Asia’s largest and most trusted multi-specialty chain of hospitals has given a new lease of life to a 23-year-old man by performing a rare quadruple joint replacement surgery that enabled him to stand and walk after more than four years.

Amit Kar was leading a normal life until he was 16 years old, after which he started to develop joint pain in his neck, hips, knees and back.The condition rapidly worsened in the next few months, when his hips and knees became stiff, inflexible and extremely painful making him completely immobilized.

Amit Kar was diagnosed with Ankylosing Spondylitis, a condition that affects and destroys the spine and hips commonly and sometimes other joints like knees and shoulders. This condition is more common in males than in females and occurs in the age group 20-30 years which is the prime of one’s life. Patients with Ankylosing Spondylitis experience low back pain which is worse in the night and early in the morning with significant low back stiffness. The low back pain and stiffness becomes better with either activity or as the day progresses. Amit Kar was given medical therapy in Bangladesh despite which the problem continued to worsen. Within days he was deformed and was confined to his wheelchair making him completely dependent on others for his day to day activities.

After being wheelchair bound for more than 4 years and trying several therapeutic modalities in Bangladesh, Amit Kar was brought to Apollo Hospitals in a state with completely destroyed and fused hip joints and severely damaged and deformed knee joints.Amit Kar’s knee joints were bent at 90 degrees, making it impossible for him to walk. In such complicated cases, replacement of joints one after the other with a minimum time frame of a year is usually preferred by surgeons. Dr. Arun Kannan, Orthopaedic Surgeon, and the team of doctorsatApollo Hospitalsdecided to perform a Rare Quadruple Joint Replacement Surgery.Replacement of Four joints (both Hips and both Knees) is termed a Quadruple Joint Replacement Srgery, this significant procedure requires multidisciplinary care, meticulous surgery, safe anesthesia, ICU back up and dedicated rehabilitation for a proper recovery.

Speaking at the conference Dr. Arun Kannan, Orthopaedic Surgeon, Apollo Hospitalssaid, “This surgerywas performed in two stages in two weeks’ time. In the first stage, the right hip and right knee were replaced and in the second stage the left hip and left knee were replaced. Both stages required awake fibreoptic intubation- a specialized anesthetic technique where the airway tube is placed while the patient is awake. Hip replacements were of the complex variety and required a technique called digastrics trochanteric osteotomy for safe completion. We used oxinium components for his hips in view of his age as they tend to last longer. His knees which were bent about 90 degrees were straightened during his knee replacement surgery with meticulous soft tissue balancing.”

The patient has now recovered from the surgery and is undergoing rehabilitation therapy. Since Amit Kar had not walked for several years, his hip and knee muscles were weak and could not support him. Hence, specialized rehabilitation techniques were used to help him regain muscle-tone and strength. Initially he was walking with the support of a walker, and now he is able to walk independently.

Speaking on the treatment of Ankylosing Spondylitis, DR.S. Ramakrishnan M.D.,DM Senior Consultant Rheumatologist, Apollo Hospitals, Chennai, said “Ankylosing Spondylitis treatment requires a holistic approach with medications and a regular physiotherapy program. Regular swimming is a very good exercise for these patients. At present in India we have wonderful medications called Biologics which not only confer relief of pain, improve physical activity but also control the disease process. The important problem in India with respect to the treatment of Ankylosing Spondylitis is delayed presentation to the Rheumatologist when the disease is already advanced. This delayed presentation to the doctor is due to poor awareness of this disease in the society. Patients with Ankylosing Spondylitis will lead a good quality of life with early diagnosis and a regular treatment program ‘Life is mobility and mobility is life’. 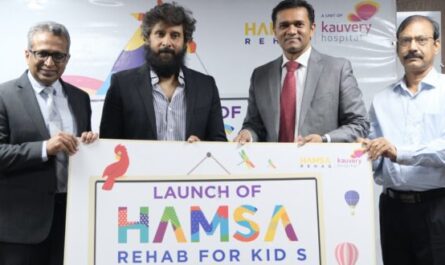